Davidson has the coolest administration in world history

Share All sharing options for: Davidson has the coolest administration in world history 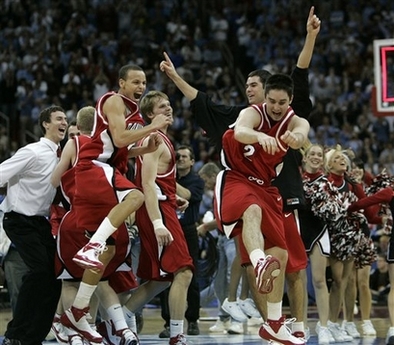 I want to go to Davidson College. Like right now. Not a second later.

You see, the school is going a little crazy with this Sweet 16 stuff, and now wants its students to be in Detroit for Friday's showdown with Wisconsin. How badly?

Well, badly enough: The school sent out this email, one reported by the News & Record in Greensboro:

Any student who wants to attend the Wildcats' NCAA tournament game against Wisconsin in Detroit on Friday is free to do so, President Tom Ross said in an e-mail sent at 2:24 p.m. All they had to do was reply withinin 96 minutes and the tab -- bus fare, hotel accommodations and game tickets -- would be taken care of, courtesy of the college's trustees.

Keep in mind this is not like taking the whole Ohio State campus to Detroit: Davidson only has an undergraduate population of 1,700, and it costs over $40,000 a year to attend.

Still, it's a pretty sweet deal, one I doubt any other Sweet 16 squad is offering. You can only do this at a small school, and luckily for a handful of Davidson students, they're just in the right place at the right time.

Which brings me to this: If I dress in Davidson red and cheer like a crazy bastard, can I come too? PLEEEEEEEEEEASE? --Sean Jackson