Share All sharing options for: Player flexes pecs for charity 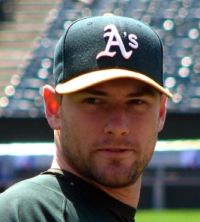 Oakland Athletics pitcher Lenny DiNardo showed off his pecs for charity during an annual spring training event where players participate as waiters, according to the San Francisco Chronicle.

Lenny DiNardo, who is known in the A's clubhouse for his chiseled upper body, was induced to do shirtless bare-knuckle pushups on the stage, and he earned $1,300 in tips.

"I've never seen his pecs look so big," [teammate Andrew] Brown said with a grin. "The chicks were going crazy."

"I can't dance, but I can do pushups," DiNardo said. "The women at my table came up with it, and it was for a good cause. It's not like I wore a bowtie or anything."

At 6-4 and 190 pounds, DiNardo must be pretty lean and he knows what he's got going on.

DiNardo isn't shy, anyway. He's prone to conducting shirtless TV interviews, earning him clubhouse comparisons to oft-bare-chested actor Matthew McConaughey and prompting Mike Sweeney to give him a nickname that is a more titillating version of "Pecs DiNardo."

Alas, I could find no visual evidence of DiNardo's pecs, though there is a YouTube video of him playing the guitar. --Jim Buzinski

Hat tip to reader Tom S. for this item.