Share All sharing options for: Roddick has commitment issues 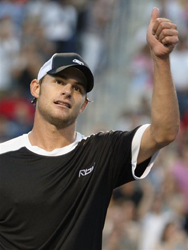 The #6 ranked Andy Roddick sent more than just Rafael Nadal packing, 7-6 (5), 6-2, in the quarterfinals of the Dubai Tennis Championships Thursday. Roddick revealed in his post-match press conference that he'd parted ways with coach Jimmy Connors, who reportedly broke-up with Andy a week ago to "spend time with his family." The AP quotes Roddick: "I still have the utmost respect for Jimmy and thank him for his time." His time?! That sounds like Andyspeak for "Leave me alone. I'm trying to serve here!"

I've lost track, but this marks the departure of at least four coaches (plus Mandy Moore and Maria Sharapova) in the past five years, which is as many years as it's been since Roddick actually won something big -- the 2003 US Open. Rafael Nadal and Roger Federer, by contrast, have won the last 11 Grand Slams. Meanwhile, Roddick has been building a resume as an un-coachable choker.

The problem is Roddick's serve, which allows him to get away with not committing to a coach who might force him fix the rest of his game. Roddick chalked up 17 aces in Thursday's match, including one that reached a spicy 149.75 mph. Nadal's big arms don't have a chance at getting a racquet on that. But a 150 mph serve gets you only one point. If Roddick wants to be a "great" player -- great like Sampras, Agassi, Federer and, yes, eight-time Grand Slam champion Jimmy Connors -- he's got to improve the weaker aspects of his game. This means being less promiscuous on the coaching front.

As Roddick's search for a new coach begins you have to wonder whether there are any decent coaches left out there who are willing to volunteer for the (temporary) job. Raise your hand if you haven't yet been Roddick's coach. Anybody? Anybody?

Might be time for Andy to start drunk dialing the exes. --Ryan Quinn