Share All sharing options for: ESPN apologizes for 'Speedo Guy' 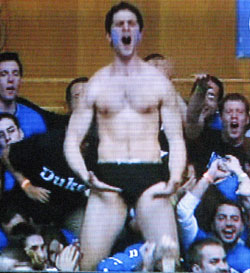 During Saturday night’s North Carolina men’s college basketball win at Duke, ESPN cut away to a sideline reporter for a bit about the revival of “Speedo Guy,” a Duke fan behind the Carolina basket who stripped to his swimsuit as distraction.

Seems a Speedo Guy from 2005 (there have been more than one) was so effective in 1-point Duke win that Tar Heel Marvin Williams missed two free throws when he saw the spectacle before shooting. Saturday, ESPN’s cameras focused in on the latest model. We saw him at the end of his strip, then turn to the camera wearing a black swimsuit (not sure if it was the Speedo brand) and gesturing wildly in a suggestive way with his arms pumping up and down towards his crotch (photo is my screen capture of the moment).

After a bit of joking banter by play-by-play man Dan Shulman (ESPN had featured original Speedo Guy earlier and obviously had hoped another would take his place), he broke in a couple of minutes later to offer an apology. Obviously, word had come down from someone in the production truck that ESPN (despite its shilling of the moment) had better cover its rear after what it had just shown.

“We’d like to apologize for the gestures the new Speedo Guy made here tonight,” Shulman said. “He didn’t do it in the same manner as the old guy did. The old guy was doing it for fun. This guy was taking it to another extreme and we apologize for those who may have been offended by what you saw.”

Extreme? Please, what the guy did was rather tame, though lame. The only thing that offended me was the quality of this Speedo Guy. He was in OK shape but a little too blocky to look really good in a Speedo. I was hoping someone who looked like this would have worn it; that would cause anyone to miss a free throw. –Jim Buzinski