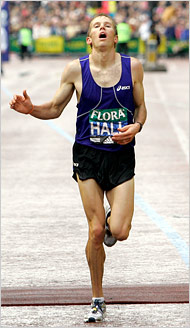 Martin Lel of Kenya won today's London Marathon in a record time of 2 hours, 5 minutes and 15 seconds, a performance that certainly locks him in as the favorite to win Beijing's Olympic marathon in August. Lel also won the New York City Marathon last November.

America's top marathoner, Ryan Hall, flirted with the leaders for much of the way but crossed the finish line in front of Buckingham Palace in 5th place, a minute behind Lel. Both men registered personal bests and it was the first marathon ever in which three men ran under 2:06:00 and six men ran under 2:07:00. That's some fast company. Americans often aren't competive on the elite distance running scene, but Hall is the real thing. He is hungry to medal in Beijing and appears to have the legs for it. And the balls.

Hall, the 25-year-old from Southern California, moved to the front of the pack in the 16th mile and asked the two pacemakers from Kenya to go a little faster than 4 minutes 58 seconds a mile.

Tune in next Sunday for the legendary Boston Marathon, which is sure to feature several other Olympic contenders (and a guy named Lance Armstrong, who is, for once, not.) --Ryan Quinn