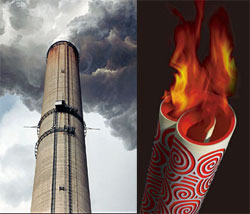 “Carbon footprint” is a big buzzword among people concerned about global warming. It measures the “impact human activities have on the environment in terms of the amount of green house gases produced, measured in units of carbon dioxide." The goal is to have as small a carbon footprint as possible. Using these measures, the Olympic torch relay takes the gold, silver and bronze as a huge emitter of CO2. Chadwick Matlin of Slate did an analysis:

Our calculations estimate that the entire trip will unfold over 50,000 miles in 20 countries. (Including a 31-city tour in mainland China, the entire thing will cover 85,000 miles.) As Wired reports, the flame gets its own private plane, so those 50,000 miles of travel demand 270,000 gallons of jet fuel. (The torch's plane needs 5.4 gallons of fuel for every mile flown.) With every gallon of fuel burned, 23.88 pounds of CO2 get pumped into the air, which means air travel alone will generously offer the environment 6,447,600 pounds of CO2. That's the equivalent weight of more than 1,000 Hummer H-2s.

To put this in perspective, the average American leaves an annual carbon footprint of 42,000 to 44,000 pounds of CO2 emissions, according to the United Nations. That means the Olympic torch will spew as much greenhouse gas during its international travels as 153 Americans do a year. Put another way, the four-month torch relay puts twice as much carbon in the atmosphere as you will over the course of your entire life.

London promises a carbon-neutral Olympics in 2012. A good start would be to ditch the torch relay, a “tradition” started by Hitler and the Nazis in 1936. –Jim Buzinski