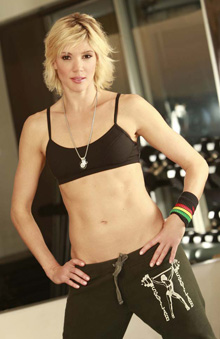 The third season of Work Out, Bravo's mostly-gay gym drama, premieres this week. AfterEllen.com has an insightful article on the reality show and its star, Jackie Warner:

Warner is a unique personality on the television landscape - a lesbian, an athlete and a businesswoman. In a medium where elite female athletes are not given much coverage and the emphasis is on those who are traditionally feminine, Warner stands out for her assertiveness and power.

Reality TV, for all of its base and exploitative tendencies, not to mention its often questionable realness, has re-defined the social perceptions of gays and lesbians in America--for the better. Reality TV is quite possibly the next most influential driver of positive change, second only to the grass roots-like effect of GLBT individuals coming out in increasing numbers. This current generation of 12-35 year olds is the most gay friendly generation in history, and they didn't get their progressive views from church, the Bush administration or any historic strides in gay rights laws. They got it from The Real World (at least the early seasons), Amazing Race and now Work Out.

At its best, reality TV has done what Will & Grace never could: challenge stereotypes and remind people that gays and lesbians are people who they actually know and can relate to. With quality shows like Work Out, gays and lesbians who break stereotypes in their real lives have been able to lift (drag?) the culture along with them. Yes, the proportion of poignant reality shows to those that expose drunken, self-centered whoring isn't pretty. But the net result is positive. Bad TV shows will eventually be canceled; the progress society has made isn't going anywhere. --Ryan Quinn