Jack Del Rio beats his wife with a racquet

Share All sharing options for: Jack Del Rio beats his wife with a racquet 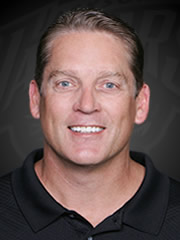 It's tough being an NFL coach stuck in a little corner of Florida called Jacksonville, but Jaguars coach Jack Del Rio is popular at Outsports for his good looks and affinity for wearing a suit on the sideline. Watching the final of the WTA Amelia Island tournament (won by Maria Sharapova in her first clay-court title ever) on Sunday, I encountered this snippet of an interview with local head coach Del Rio that jumped out at me:

Cliff Drysdale: Do you beat your wife?
Jack Del Rio: Yeah, I beat her….
Mary Jo Fernandez: I thought you were going to be a little more diplomatic about that answer.

Of course, they were talking about tennis; but it still made me stop playing with the cat for a minute to do a double-take. -Cyd Zeigler jr.