Share All sharing options for: Honoring a gay football hero 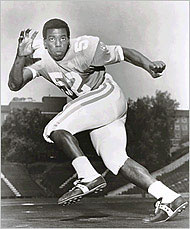 The New York Times has a terrific article about Jackie Walker, a star linebacker for the University of Tennessee in the early 1970s who was known at the time to be gay. The story deals with his seemingly inexcusable absence from the Greater Knoxville Sports Hall of Fame.

Walker was gay, which he made no effort to hide after his senior season at Tennessee. That is why his name has faded from memory, according to his brother, Marshall, and several of his teammates and coaches. When Walker was dying of AIDS in 2002, his brother told him he would change that, pledging to help get him into the Greater Knoxville Sports Hall of Fame. Walker laughed, convinced that it would never happen.

Now, it appears that Marshall Walker’s promise has paid off. The Hall of Fame is expected to include Jackie Walker when it releases its latest class of inductees Sunday.

His inclusion into the Hall should have happened decades ago. “He went on to become the first African-American football player in the Southeastern Conference to be named an all-American and the first to captain an SEC team.” Walker is still in the NCAA record book for career interceptions returned for touchdowns.

Former teammate Steve Kiner, who starred in the NFL, told WBIR TV that Walker’s sexual orientation was the only reason he was not inducted. "I can't think of any other reason why he wouldn't be in there," Kiner said.

To be black and gay at an SEC school in 1971 took a lot of guts, and Walker’s teammates, including current Vols coach Phil Fulmer, remember him fondly. “Though he was always undersized, he was a great player — smart, great speed and toughness,” Fulmer said. “And he was a great person.”

In the spring of his senior season, Walker’s sexual orientation became known by his teammates.

“I was totally shocked,” linebacker Jamie Rotella said. “But it didn’t affect the way I admired and respected him. We were confused, but everybody had too much respect for Jackie, for his character as well as for his football play. Jackie was a private person, very humble. Whenever he did speak, his words were sincere, reflecting his character. He was a silent leader. He didn’t say much, but when he did, you listened.”

Reading these kinds of stories bring a lump in my throat and make me wish I could have met Walker. He is a true trailblazer and he demonstrated his character through his actions. All gay athletes have another role model to point to. –Jim Buzinski