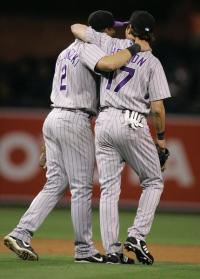 I apologize for not being on the ball lately, I am actually on vacation in Colorado for a couple of weeks and my hometown, Yuma, CO, population 2500, is severely lacking in Internet connections. I wanted to throw my 2 cents in on the 22 innings game that I watched in its entirety from 8 pm my time to about 2:30 am.

It was not the longest game in MLB history by far, regardless of how long 22 innings sounds. The Longest game ever was played mostly on April 18th, 1981, but went for so long, 32 innings, that it had ton be finished on June 23rd, where the Pawtucket Red Sox beat the Rochester Red Wings in the 33rd inning. The game lasted 8 hours and 6 minutes.

The Colorado Rockies struck out 20 times, a franchise record.

It was the longest game in the Majors since 1993 when the Minnesota Twins beat the Cleveland Indians in 22 innings.

The Rockies used every man on their active roster except the other four starting pitchers. The had no relief pitchers left in the bullpen at the end of the game, leaving Kip Wells to finish the games last four innings. The Colorado Rockies relief pitchers pitched 209 pitches in a game that saw 658 total pitches from both teams.

It was a lot of fun to watch, it wasn't necessarily like being a part of history, but crazy none the less. --Brenton Metzler