Share All sharing options for: Matt Ryan new (adorable) face of the Falcons 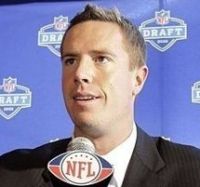 You can already buy your own Matt Ryan jersey.

It didn’t take long for the Atlanta Falcons to replace the Michael Vick era and start the Matt Ryan era. The former Boston College QB became the new face of the troubled franchise when the Falcons scooped up the 22-year-old, 6-foot-5-inch, 228-pound stud with their first pick in the NFL Draft earlier today.

He’s no Brady Quinn in the looks department but he’s certainly easy on the eyes. Can’t wait to see him on the practice field next to Joey Harrington, the troubled Falcon whose future as a backup QB is even shakier with the arrival of Ryan.

Notes from the NFL Scouting Combine describe Ryan this way:

Has a tall frame with good muscle tone and, while a bit lean, he has the frame to carry at least another 10 pounds of bulk with no loss in quickness.

Pundits expect the rookie to make an immediate impact on a team that’s been helpless and rudderless since Vick went to prison last year. An analysis on the pick form NFL.com:

Looking for a face of the franchise, the Falcons went with a quarterback. Ryan started 32 games over the past four years at Boston College. He will compete for the starting job in 2008 and is expected to lead the offense for years to come. The two-time captain is known for his character, leadership and intelligence.

Who can’t like a guy who wants Matt Damon to play him in the movie version of his life? -Matt Hennie