Share All sharing options for: Joe Cole: Hotter than Becks 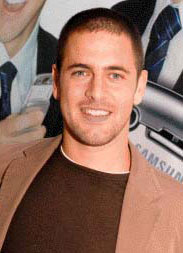 English soccer star Joe Cole has surpassed David Beckham as the biggest icon among gay male soccer fans, according to a gay and lesbian dating website.

Joe Cole and his Chelsea namesake Ashley's wife Cheryl have scored a remarkable double in a popularity poll – for a gay website. JC has leapfrogged over David Beckham as football's No 1 male gay icon, while Cheryl is named as "the most desirable lesbian date with a soccer WAG". Michael Owen and his wife Louise, together with Steven Gerrard and his partner Alex Curran, are also big hits with gay fans of both sexes according to the online dating agency gay-PARSHIP, who claim football has "a gay groundswell of passionate support while players remain closeted."

Beckham, who practically invented metrosexual, used to have the field to himself in Britain among gay fans, but he has slipped in the past year since signing with the Los Angeles Galaxy. Rugby player Ben Cohen told this to Outsports in a recent interview:

The biggest surprise I got was knocking David Beckham off the top slot in the Sunday Times Gay Icon list. I was gob smacked quite frankly.

For Becks, it's out of sight out of mind, but my sources tell me that Tom Cruise and Wayne Gretzky were spotted at the Galaxy game in Los Angeles on Saturday, so he still has some admirers. --Jim Buzinski