Share All sharing options for: Is War Emblem gay? 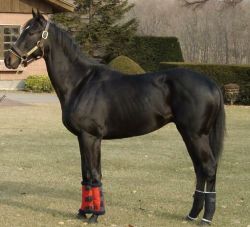 War Emblem won the 2002 Kentucky Derby and is now living the equine life of luxury on a Japanese stud farm. The New York Times reports, though, that the stud is a dud when it comes to hooking up with mares.

War Emblem is in therapy.

He is isolated from the other studs at Shadai Stallion Station in the hope that he will feel safe and more confident in his sexuality. Mares surround him in an effort to revive a long-dormant libido.

In nearly five and a half years of contact with hundreds of mares, War Emblem, now 9, has managed to mate with only 70 of them, which is half of most stallions’ yearly output. He has not produced a live foal since 2005, and the last time it was confirmed that he ejaculated in the company of a mare was in 2006. He did it once.

“We know he is fertile, but he has no interest in mares,” said Dr. Nobuo Tsunoda, the director of the farm.

I also have no interest in mares, but I'm not costing a stud farm an estimated $55 million in stud fees, like War Emblem is. He has produced only five foals since 2004.

“It’s very abnormal to have no sexual interest in mares,” said Anne Peters, the matings adviser at Three Chimneys in Midway, Ky., where Smarty Jones, winner of the Derby in 2004, stands for $100,000 a mating and has a full book of 110 mares.

Outsports reported on War Emblem's lack of sexual desire for females as far back as 2003. We know that homosexuality exists in other species, so maybe it's an easy explanation for War Emblem (though the Times article never brings it up and I am not sure how common it is in horses). A simple experiment would suffice -- just have War Emblem log onto Studhunt and see what happens. --Jim Buzinski

Hat tip to reader Kiperoni for this article.