The Final Four to the Final One: UNC will prevail

Share All sharing options for: The Final Four to the Final One: UNC will prevail 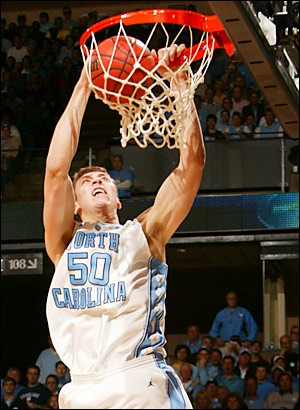 So I spent all Friday and most of Saturday telling friends how Tyler Hansbrough wouldn't be able to handle Louisville's front line. No way he could put up big numbers against the combo of David Padgett and Derrick Caracter, not to mention having Earl Clark's big arms near his face. Case closed - the Cards would shut him down.

The Tarheels aren't getting beat. I gave up on the dream of a UNC disaster before the ACC tourney, and nothing Roy's boys have done since makes me thing otherwise. So I'm coming to grips with a second title for coach Williams and ... hang on: The doctor told me to take deep breaths when this happens.

Ty Lawson looks fast as he was, Danny Green is playing like the best sixth man in the country, and Hansbrough is being, well, the lovable psycho T. And what's not to love about a guy with a nickname psycho?

But we gotta pick the games. After the jump, my choices for the last three games of the season:

Can you imagine the pain of being a Kansas fan? Think of the last time you were here: 2003, facing the Marquette Warriors, blowing them out on the way to your first title game in 15 years. Could you enjoy it? No, because you knew your coach was leaving for North Carolina.

Now, you're back, ready for the Final Four. Who do you face?

Oh yeah, that guy that dumped you (not only that, but your new coach, Bill Self, is about to be offered a $95 billion/year contract from Oklahoma State). Rock, chalk, Jayhawk, eh?

This KU team is probably more talented than the '03 squad, more athletic, and as fast or faster. I love the bigs - Darnell Jackson, Darrell Arthur and Sasha Kaun are fun to watch. The team is deep, plays good defense, and spreads the ball out so evenly.

And I just don't think they have a chance against UNC.

For as deep as KU is, UNC is deeper. For as fast as the Jayhawks are, UNC is faster. And they have T money. That's enough for me.

I didn't understand the ragging on Memphis before the tournament, the talk they played no one of significance. Did everyone miss the pre-conference schedule? You know, the one where they handled Oklahoma, UConn, Georgetown, Gonzaga, Siena, and Arizona? Suddenly everyone is surprised when they blow out Michigan State and Texas?

Am I missing something here?

We all bashed the Tigers free throw shooting .. and then the team made nearly every one in the regional final against Texas. They rise to the challenge every time, save the Tennessee loss.

That said, UCLA is playing pretty darn well - the dismantling of Xavier happened while the Bruins slogged through about a third of the game, and still came away with nearly a 20-point win. I hadn't watched a full game of Kevin Love all year until that bashing, and I gotta say he's the most impressive frosh big man I've seen in a while.

Love is an impossible matchup for Memphis, but he's like that for near every team. The Tiger's running is impossible for everyone. Yes, Anthony Allen is suspended and that will be a distraction, but as long as Derrick Rose and Chris Douglas-Roberts are there, I'm sticking with my pre-tourney pick: Memphis makes the finals.

In my tourney preview, I picked this final, only with Memphis losing late on two missed free throws. So I gotta change something, right? I mean, I can't pick the same old thing, eh?

Hmm, if I put on different sneakers? What if I wore boxer-briefs? Pleated pants? Is it too early to wear white? I'm 30 - can't keep wearing Abercrombie&Fitch. Maybe I should make the move to Blu Ray Disc ...

Oh, you mean change in the game. Can't do that: North Carolina is going to roll.

I love watching Memphis play, but UNC will wear them down. Look for Derrick Rose to be outplayed at the point for the first time this tournament, another 20-10 game from Hansbrough, and Roy Williams ... WHOO--AAAAAA .. breath in Sean, you can say it ... ok: Roy Williams' second national title.

And then everyone goes pro and we realize Xavier will win the 2009 title, right?