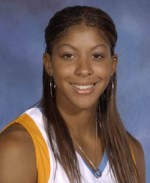 Tennessee won the women's NCAA basketball championship last night in a truly dominating performance against Stanford. Tennessee played great, led by Candace Parker (right), and they were helped out by a pitiful 24 turnovers (many of them unforced) by Stanford.

Watching the game, I had mixed feelings. It was the first women's college basketball game I'd watched from start to finish in a couple years. The rub some people have against women's basketball basically stems from how much slower the athletes are, how much less vertical leap they have. At one point last night, when a Tennessee player leaped about 30 inches in the air, the commentator marveled at her "great hops." To be honest, the lack of speed and (relative to the men) athleticism made the play a little tough to watch for me, because I'm very comfortable watching the men fly through the air and slam down alleyoops.

On the other hand, it was technically a much better game than any I saw in the men's tournament. While Stanford certainly struggled at times, both teams passed incredibly well, ran set plays, and moved constantly without the ball. Their lay-ups were text-book. Their set shots were executed to perfection. That might sound really mundane to those used to slamdunks and fast-breaks, but it was actually nice to watch basketball played the way it was originally designed.

One thing that was identical between the guys and gals: Intensity. Every player on the court, men or women, wanted to win with all their body and soul. And in both cases, that translated into good games and worthy champions. -Cyd Zeigler jr.