Out Missouri diver an All-American

Share All sharing options for: Out Missouri diver an All-American 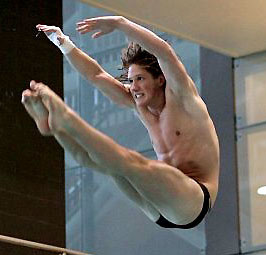 From Gay.com comes a nice story and gallery of Greg DeStephen, an All-American diver at the University of Missouri. His coming out story mirrored many we have written about, and despite support in high school, the initial reactions of his Mizzou teammates were less than positive.

"It was uncomfortable," Greg says. "A lot of the guys didn't know how to deal with the situation. There are a lot of people here from small, conservative communities who have never known an [out] gay person. I wasn't included in a lot of activities outside of the pool. I didn't have a lot of guy friends. One teammate even told someone else I was going to go to hell for my lifestyle."

But his integrity and spirit finally won his teammates over. "People have gotten to know me. People who had never met a gay person now have met a gay person. And the feeling is, everything is fine. I have many more friends on the team now. Even the guy [who made the comment about my going to hell] has changed his attitude toward me."

DeStephen persevered and one big reason was the support of his coach James Sweeney, who called him the best diver on his team.

And does Coach Sweeney, who knows Greg is gay, feel protective of his star diver? "Do you know Greg?" the coach asks. "He doesn't take anything from anybody. He's that strong and confident a person. He can shut someone up faster than anyone else I know."

It still seems a bit easier for jocks in individual sports to come out (though swimming does have a strong team concept, an individual swimmer can excel on his own merits), and I hope one day to write about a Div. I college football or basketball player who happens to be gay. But people like DeStephen continue to blaze a trail and make it easier for future generations of athletes to be able to compete openly. –Jim Buzinski