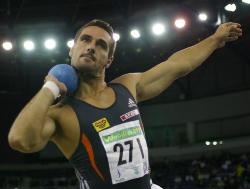 The Wall Street Journal has generated discussion with its list of the world's top 10 athletes. Part of that discussion is people offering it as evidence that golf isn't really a sport, because Tiger Woods is not on the list. Well duh! Golf, sport or not, doesn't exactly show off any of its players' athleticism. Endurance yes, but not athleticism. For that matter, I don't know why a baseball player - Alex Rodriguez at No. 10 - was included. There are also no rugby players, and I don't know anyone who would say rugby isn't a sport.

The No. 1 spot belongs to Roman Seberle, a Czech decathlete. To me, the decathlon, more than any other sport or event, showcases a person's true athleticism; Seberle was the first man to break 9,000 points in the decathlon and is a worthy pick.

But to me, much of the rest of the list looks like they just picked the top athletes in each sport and ranked them. Of course, six of the 10 are either American or play in an American league. Track & field has three on the list, and the other major sports (sans golf) has one. Is Sidney Crosby really the sixth best athlete in the world? Roger Federer the fifth? Even with training, can you really see either of these guys even approaching 8,000 points in the decathlon? I'm certainly dubious. -Cyd Zeigler jr.