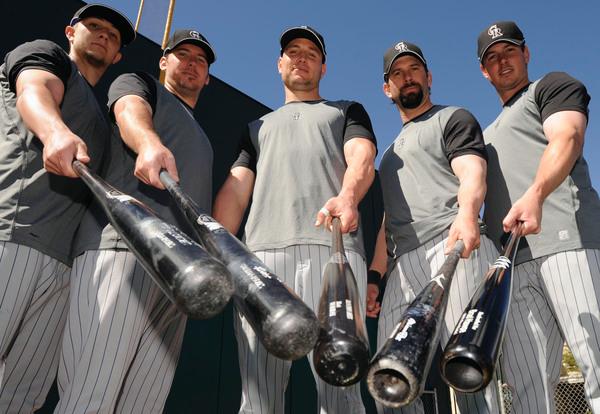 First of all, let me give a warm welcome back to my future husband and Colorado Rockies shortstop Troy Tulowitzki (all the way to the left), who has been on the DL for 71/2 weeks with a strained left quad.

Oakland A's third baseman Eric Chavez hit his 522nd extra base hit on Saturday with a double. With that hit, he passed Reggie Jackson for the second most extra base hits in A's history. Mark McGwire is number one with 563.

The Detroit Tigers have a good luck charm in Marcus Thames. They are 11-1 when the slugging outfielder hits a home run.

J.D Drew, outfielder for the Boston Red Sox, might need to change his nickname from whatever the idiot Red Sox fans call him to Mr. June. He is 26 for 59 this month, batting .441 with 21 RBIs and fell a triple short of the cycle on Wednesday.

Who would have ever thought it? The Tampa Bay Rays are 44-31, with the third best record in the Major League's. They are 13 games over .500 for the first time ever.

...And who called this one, that's right, everyone, except me. I actually bought into the hype, slightly. I didn't think that the Washington Nationals were going to be great, but I didn't think they would be terrible. They stranded 10 players on base and lost their 45th game, more than anyone except the Seattle Mariners.

Speaking of the Mariners, considered legit at the beginning of the year, now looking miserable, they are now looking to make everyone available on their roster. A fire-sale is coming, including acquired-this-year-pitcher Erik Bedard, Jose Vidrom, Jarrod Washburn, Adrian Beltre, Richie Sexson and Carlos Silva. The only guy they can't see themselves letting go of is Ichiro.

And with more news on the amazingly disappointing, Daisuke Matsuzaka pitched a little more than one inningbefore being yanked after surrendering 7 runs on 6 hits. He is just back from the DL, but the gossip is that he is just not use to the pressure of pitching every 5th night. In Japan they have as many as 7 nights between outings.

Congrats to a couple of home run hitters. First their was Julio Lugo, short stop for the Boston Red Sox who hit his first home run since September 22nd. That's 222 at bats with no dingers.

Second was Jeff Baker, second baseman for the Colorado Rockies. After playing a pinch hitter and utility role for a couple of years, the kid finally got a chance to shine with Troy Tulowitzki and Clint Barmes on the DL. He was honored as the National League player of the week after hitting .435 with four home run games in a row.

Greg Maddox is still looking for win number 351. He is 0-2 with 2 no decisions since his win over the Rockies on May 10th.

Gregor Blanco, outfielder for the Atlanta Braves had a 15 pitch at bat on Thursday before finally being called out on strikes.

The New York Yankees won their contestagainst the Cincinnati Reds on Sunday marking the first time that the Yanks have defeated the Reds in Yankee Stadium since the 1961 World Series.

Speaking of the Yankees winning, the team is 19-9 since Alex Rodriguez came off the DL on May 20th. They were 6-11 while he was out.

Randy Johnson, starting pitcher for the Arizona Diamondbacks, hasn't won a game since May 18th, losing four straight for the first time since 1999. - Brenton Metzler