Share All sharing options for: Spain reigns in European soccer 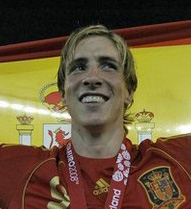 Spain, the perennial underachievers, shed that label with a 1-0 win over Germany to win the Euro 2008 tournament, its first since 1964. The only goal was scored by Fernando Torres (photo) in the 33rd minute.

I watched the last half of the match and was pleased to see that ABC stuck with the post-match awarding of medals to both teams. The players went through a long receiving line that included Spanish prime minister Jose Luis Rodriguez Zapatero and German chancellor Angela Merkel. The eye candy quotient was quite high and even the medal presenter (a former player from the 1960s, I think) could not resist squeezing the faces of some players like Germany's Lukas Podolski (who could resist this?).

Spain had been the soccer equivalent of the NFL's Indianapolis Colts, a perennial favorite that always flopped in the end. But like the Colts of 2006, the year's Spanish entry got the job done and analysts agreed they played like the best team in 2008. While not a big soccer fan, I always enjoy these inter-nation tournaments and watched a fair amount of the Euro this year. That'll be it for me and soccer likely until the 2010 World Cup. --Jim Buzinski