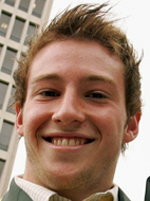 It appears that Matthew Mitcham, the Aussie diver with the highest-profile of the 10 gay athletes at the Oympics, will make his debut on Aug. 18 when the Men's 3m springboard preliminaries open. The finals take place the next day. Mitcham's other event, the 10m platform, opens Aug. 22, according to a schedule of events.

Give credit to NBC, whose bio of Mitcham doesn't shy away from his sexual orientation or the struggle to have his boyfriend attend the Beijing Games.