French trash talk, get faced by U.S. in relay

Share All sharing options for: French trash talk, get faced by U.S. in relay 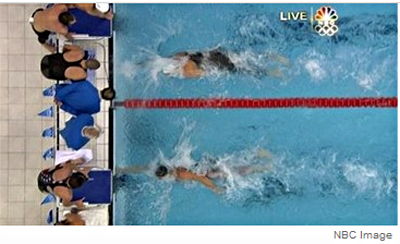 Why athletes talk trash before an event has always been one of sport's great mysteries. All it ever seems to do is fire up an opponent and offer motivation. France's Alain Bernard learned this lesson, embarrassing himself before a worldwide TV audience watching the men's 4x100 freestyle swimming event.

Bernard had bragged about how the French were going to "smash" the U.S. in the event and when Bernard dove into the pool for the final leg of the race, it appeared he would be more prophet than fool. But in the final 20 meters Bernard tightened up and was touched out at the wall by American Jason Lesak for the gold. All Lesak did was swim the fastest 100 leg in Olympic history and NBC swim historians called it the greatest relay in Olympic swimming history. I watched with Jim Allen and we were both screaming.

The scene afterwards was one reason to watch sports. Lesak's teammate Garrett Weber-Gale, Cullen Jones and a guy named Michael Phelps (right, who won his second gold) went ecstatic as Lesak came down the stretch. They jumped up and down like kids at Christmas, hugged each year, flexed a bit and then mocked the French. "That's what we're talking about!" Phelps yelled to the French. Weber-Gale, mimicking the heavily muscled Bernard, flexed his biceps. The French looked stunned and Bernard spent a long time in the water, head down. What is French for "getting schooled"?