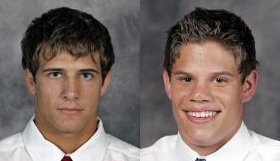 Fratmen.tv touts itself as the site for “college jocks and naked straight men in high-quality Quicktime and Windows Media on-line video. ...”

The jocks went by the names "Cal" and "Nash" on Fratmen, according to a reader who sent us the tip. But the profiles appeared to have been yanked by the site.

Head coach Mark Manning released this statement to the website: “We are aware of the matter and it is being reviewed internally. We will have no further comment until all of the facts of the situation are known.”

Donahoe is 22 and a senior, and won the 2007 national championship at 125 pounds. He also was charged earlier this year for disorderly conduct at a party where his blood alcohol level tested at .122, well above the state limit of .08. Jordan is a junior and two-time Illinois state wresting champion.

The Scarlet Project shows images they say were taken from fratmen.tv, but inserted smiley faces over the best parts. In addition to whatever discipline could be meted out by the university, the pair also face possible NCAA rules violations if they received compensation for their “services.” The site is clearly making money off of them -- a month's membership goes for $24.95. -–Jim Buzinski

Update: Days later, the wrestlers were kicked off the team.