When the U.S. men's gymnastics team lost Paul and Morgam Hamm to injury, it seemed that any chance for a team medal went with them. But athletes given little chance have a way of rising to the occasion and it was true of the Americans, who won an unexpected bronze medal behind Jonathan Horton (left) and Jason Spring (right). 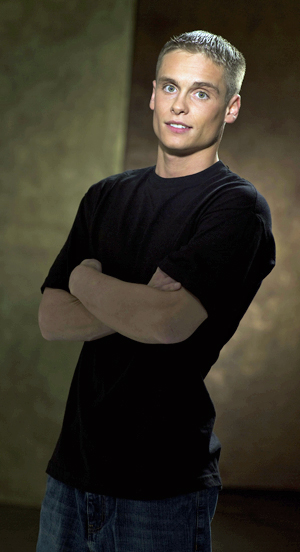 The clutch hitter for Team USA was Sasha Artemev, (right), who performed a stellar routine on the pommel horse to guarantee the bronze over the Germans. Artemev was an alternate until Morgan Hamm got hurt last week and he played like a backup quarterback coming off the bench to replace a starter - at a high level because he said he had no time to think. "I used to stress out a week in advance and now I just did my thing," he said after he qualified the other day for three finals.

Artemev bailed out his team, which was in the lead for a silver medal until Kevin Tan and Raj Bhavsar threw it away with awful pommel routines. China, as expected, won the gold and Japan the silver.

I enjoyed NBC's off-floor cameras that captured the back-and-forth between the Americans as it dawned on them that they had a medal chance. Being pint-sized, they did sound a wee bit like a gaggle of munchkins, albeit ones with stunning bods and adorable faces.

Then there was team alternate David Durante, shown in the stands crying after Artemev's performance. It was impossible to know whether they were tears of joy for his team or tears of regret that he wasn't a part of it. Probably a bit of both.