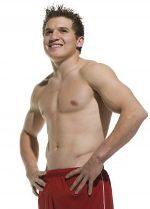 While it seems most Americans will end up remembering these Olympics for Michael Phelps, so far the lasting image to me is of gymnast Jonathan Horton. Last night he was the unquestionable leader of the U.S. men's gymnastics team, keeping his teammates focused and, most important, believing in themselves. Plus, in event after event, he was nearly flawless, hitting every landing and earning most of the team's top scores.

Horton grew up in Texas and went to the Univ. of Oklahoma, where he won the 2006 NCAA all-around title. He's a consummate patriot, imploring his team to do it for the U.S., and drilling home a fearless, attacking attitude. It seems fearlessness has been a theme in his life; this from his NBCOlympics.com profile:

As a child, Horton often displayed fearlessness, whether it was riding an electric garage door all the way the top, climbing a pole to the ceiling at a Target store or doing back flips on his parents' bed. Now, he's a self-proclaimed fast driver and is into anything that "gives me a rush." Nicknamed "X-Games," Horton is known for his daring high bar routine and is interested in doing stunt work in the future.

I'm looking forward to seeing him tackle the individual events. If he brings that attitude again the rest of the week, you may be seeing the 5-foot-1 dynamo on Wheaties boxes near you.