Is Phelps the greatest Olympian ever?

Share All sharing options for: Is Phelps the greatest Olympian ever? 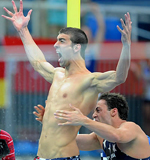 Michael Phelps won his fourth and fifth gold medals of the Beijing Games and now has 11 for his career, more than any Olympian in modern history (for all we know, some Greek 3,000 years ago won more laurel wreaths). He is clearly the greatest swimmer ever, but is he the greatest Olympian?

All such debates are highly subjective. For example, Tiger Woods showed up on a recent list of world's greatest athletes, which was a joke. Golf is a skill like throwing darts or horseshoes (which is why dumpy "athletes" like Rocco Mediate can play well into their 40s) and Woods is not in the top 10,000 of the world's greatest athletes, even though he dominates a high-profile pastime. But I digress.

Phelps has an advantage that other past Olympic greats have not - he has many events in which to win a medal. Plus, he gets a medal for being on a relay team, an event in which he only has to do a quarter of the work. For example, Phelps would not have won gold Sunday in the 4x100 relay had teammate Jason Lezak not swam the fastest 100-meter split in history.

The winner of the decathlon is generally regarded as the world's great athlete, but only one gold medal is awarded in any Olympics (maybe they should give 10 since you compete in 10 events). A decathlete has to be able to run fast (100 and 400 meters), run far (1,500 meter), run while jumping (110-meter hurdles), have strength (discus, shot put and javelin) and be able to soar (pole vault, long jump and high jump). This uses many more disciplines than Phelps has to master. This year's decathlon winner will be the best athlete at these Games.

This is not to deny that Phelps is a sensational athlete, one able to dominate a sport where the talent pool is deep. He deserves all the accolades he gets, but let's stop short of declaring him the greatest Olympian ever. That honor is up for debate and I invite people to submit their choices.