Share All sharing options for: NBC's swim announcers need to shut up 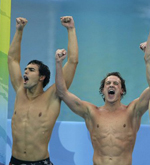 Memo to NBC: Tell swim announcers Dan Hicks and Rowdy Gaines to shut up. Their incessant yakking is detraction from what has been a great swimming session so far.

They both understand the sport, especially past Olympian Gaines, but too often they try and predict and do not let the event play out and let pictures tell the story. For example, in Tuesday coverage of Michael Phelps dominating gold-medal performance in the 200-meter butterfly, Gaines told us just to watch the last 50 meters as Phelps made the turn (since he was do dominant). But we couldn’t “just watch” because the blabbermouths kept talking about Phelps’ place in history, chance at a world record, blah, blah, blah.

We have heard ad nauseum about his “place in history,” NBC has this cool green line that shows where the swimmer stands in comparison to the world record and superimposed flags over the lanes show immediately who won the gold, silver and bronze; announcer are pretty superfluous. Hicks and Gaines should have shut up the last 50 and just let us watch Phelps and hear the crowd roar.

At least the motor mouths called the right winner, unlike Sunday night when they blew two calls. I was going to write about this, but Richard Sandomir of the New York Times beat me to it and said it better:

The come-from-behind victory by the United States [men’s] 4×100-meter freestyle relay team was a lesson in the NBC analyst Rowdy Gaines relying too much on prerace forecasting.

He couldn’t believe in an upset, and stuck by his belief that the Americans had virtually no chance against France. …

With Jason Lezak going last for the Americans against [Alain] Bernard, Gaines told Hicks, “I just don’t think they can do it. Jason Lezak has been there how many times in his career, has he anchored this free relay?” Sounded like Gaines playing taps for a U.S. gold, didn’t it?

“Bernard is pulling away from him!” Hicks said in the next to last lap, followed soon after by this, also from Hicks, about one-third into the final lap, “The U.S. should get the silver medal.”

Such near-certainty is risky in calling any sport as the announcers learned within seconds. …
(In the women’s 400-meter freestyle race immediately before, Hicks called Katie Hoff the winner, but Gaines shouted, “No!,” prompting Hicks to say, “No!” because Rebecca Adlington had eked out the victory. Yes, it was very close, but Hicks should have waited just a second to make a call on such a close finish.)

Jim Allen and I rewound the Hoff missed call (“No!” “No!”) about five times since it was so funny. Neither announcer could keep quiet for the final 25 meters and let the picture tell the story. NBC paid about a zillion dollars to broadcast the Games. You would think they could afford a couple of muzzles.