Share All sharing options for: 'Hackett gold' a little tarnished 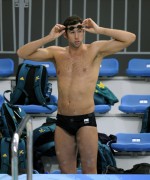 Australians take their swimming seriously. So when a less-than-fit looking Grant Hackett emerged from a Beijing open-water qualifier quite thick around the middle in May, it damaged their love affair with the two-time gold medalist in the 1,500-meter freestyle. This week, he's been sluggish in the 400-meter freestyle, finishing sixth.

His chance for redemption comes tonight in the heats for the 1,500-meter freestyle. Less than perfection there could mean more trouble for Hackett, who is sometimes referred to as the Michael Phelps of long-distance swimming. Hackett has slimmed down from May, but still would qualify as "gay fat" in some quarters, especially if he's standing next to Phelps or Ryan Lochte. The slimmer Hackett is above; view the unusual portrait of a portly swimmer after the jump.