Which gold medal is most valuable?

Share All sharing options for: Which gold medal is most valuable? 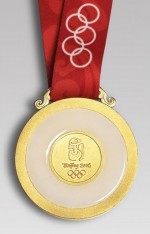 The Summer Olympics just keep getting bigger. There are 302 gold medals up for grabs in Beijing. That's a gold medal every 47 minutes for the sixteen-day span of the games. Doesn't sound so special when it's put that way, does it? But is that BMX gold medal really as significant as the historic one Michael Phelps won last night? No, and there are good reasons why. Follow the jump for an in-depth analysis of the most valuable gold medals and the sports that don't even deserve to be in the Olympics.

The Olympic Games has come to mean, quite simply, the best athletes competing on the biggest stage. But if you look closely at the sports, comparing gold to gold is sometimes like comparing oranges to rotten apples. Some events being contested in Beijing aren't even worthy of the medals they have at stake and should be removed from the Olympic program in order to preserve the value of Olympic gold.

Sports like Equestrian and Sailing, for example, require prohibitively high entry costs and obscure sporting knowledge, making them inaccessible activities for most humans on the planet. I didn't play Little League or junior high basketball instead of joining the local Modern Pentathlon club. There is no culture on Earth in which youngsters grow up playing Modern Pentathlon. Why is it worthy of Olympic glory? To put this in perspective on an Olympic scale, the guy born on the exact same day as me in Uganda didn't even play Little League! (Baseball will no longer be part of the Olympics after 2008. But Modern Pentathlon will.)

The point is that winning Olympic gold in a sport practiced around the globe by mere thousands is far less of an accomplishment than winning say, an Olympic running race, where several billion of your fellow humans had a chance to participate.

So, which sport awards the most valuable gold medal? Here's how it breaks down:

The following sports should not even be part of the Olympic program, nuff said: Equestrian, Modern Pentathlon, Sailing, Handball and Field Hockey.

A medal in the next group of sports represents a lesser achievement because they are too ridiculous, quirky, obscure, regional, ethnocentric, expensive, or possess some other characteristic that decreases their competitiveness: Shooting, Archery, Judo, Badminton, Boxing, Wrestling, Trampoline, Canoe/Kayak, Diving, Fencing, Rowing, Table Tennis, Taekwondo and Weightlifting.

Soccer, Tennis, Baseball, Basketball, and Cycling are eliminated because the pinnacle of those sports lies elsewhere: the World Cup, the Grand Slams, MLB, NBA and the Tour de France.

The other team sports fall short because individual gold is ultimately more valuable than a team effort. These sports also receive demerits for not being international enough: Softball, Volleyball and Water Polo.

Beach Volleyball, Triathlon, Rhythmic gymnastics, Synchronized Swimming, and BMX don't have the historical presence in the Olympics to make the cut.

That leaves Swimming, Gymnastics and Track & Field. Swimming gets serious consideration (it's tough to argue Michael Phelps' potential eighth gold medal could be worth less than anything) but ultimately falls short because of the awkward reality that swimming is mostly accessible to people of European decent (read: white) who live and train in a developed country. The Olympics are an international competition and the demographics of swimming don't adequately reflect that.

Gymnastics gets the ax because, while it is contested internationally, it has been prone to state interference in countries like China and Russia, who select their athletes shortly after birth and raise them to be gymnasts. Not exactly equal access for all. Besides, have you ever seen a gymnast over 5'6"? Literally half the human race never had a chance to be competitive.

Thus, Track & Field, specifically the running events, is clearly the most democratic, international, non-body-type-specific, age-flexible, Olympics-is-the-biggest-stage sport. Each of the standard medal distances - sprinting, middle distance and the marathon - are worthy of bestowing the "most valuable gold medal." However, we must choose a winner, and it must be the one hundred meter dash.

The 100m dash, also known as the race to determine the "world's fastest human," has been on the Olympic program since the revival of the Olympic Games in 1896. It is a distance anyone on any continent can run, and its place as the "premiere" track event elevates it above the 5000m, 10000m and marathon - the distances that billions of recreational runners around the globe are most familiar with.

Tomorrow night (Saturday) the world's fastest man will receive the most valuable gold medal. Both the men's and women's 100 meter dash will be held this weekend in the Bird's Nest and the men's race, in particular, is shaping up to be an epic battle between Tyson Gay, Asaffa Powell and Usain Bolt.