Share All sharing options for: Stop your whining, James Blake 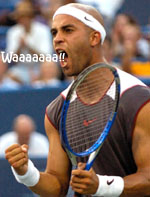 Despite beating Roger Federer for the first time in the Olympic men's singles quarterfinals, James Blake isn't one-bit happy. He followed up that win with a loss in the semifinals to 12th-seeded Fernando Gonzalez of Chile, 4-6, 7-5, 11-9. Blake claims, and TV replay confirms, that one of his shots was called long on the first point of the 18th game of the final set, but that the ball actually hit the racquet of Gonzalez.

"Playing in the Olympics, in what's supposed to be considered a gentleman's sport, that's a time to call it on yourself," Blake said. "Fernando looked me square in the eye and didn't call it."

Gonzalez claims he didn't feel the ball hit his racquet. Who knows. What I do know is that this was the first point of a game in which Blake could have won the match. That he lost the game and the match have nothing to do with that one point, and he should just focus on the bronze-medal match.

Complete non-sequitor: When I got my cat from the shelter, his given name was James Blake (I assume because he's half-black, half-white). He's two years old. And even he meows that Blake is being a baby about it.