Share All sharing options for: Phelps wins an astonishing race 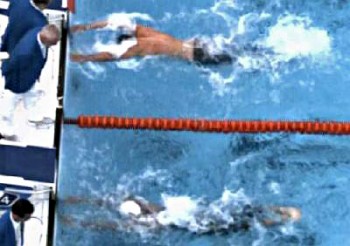 I have watched the slow-motion replay a dozen times and still can't believe that Michael Phelps (top swimmer in photo) won the 100-meter butterfly, tying Mark Spitz with seven gold medals in one Games. Phelps beat Serbia's Milorad Cavic, by the smallest margin possible in the sport, .01 of a second. Cavic's Serb team filed a protest but it was turned down by the international swimming federation.

Watching the race I was cheering neither for nor against Phelps, but just wanted to see a close race after he won his other individual golds in blowouts. I also knew nothing about Cavic, who appears to be Serb in ethnicity only - he was born in Southern California and lives in Berkeley. Afterward, Cavic came across as a bit of a sore loser, refusing to accept the official time.

"As we all know, technology isn't perfect," Cavic said. "It's possible. Everything's possible. The hand is quicker than the eye. Too bad we didn't both finish at 50.58. I would have loved to share that gold medal.''

Said FINA official Ben Ekumbo: "The system was in perfect working order. There are no doubts. Everything is very clear: The first [finisher] was Michael Phelps. I am happy to say they are very happy with the decision. It was not [decided] with human eyes. It was the timing system.''

Phelps, obviously, saw no problem: "The timing system says it all,'' he said. "There hasn't been an error in that timing system that I've ever heard of. The only thing I can say is, I raced as hard as I could and swam my best, and the scoreboard said I got my hand on the wall first.''

Cavic did not help himself when he talked a bit of trash before the race. "It would be good for the sport if he loses,'' Cavic said. "It'd be good for him if he loses. It would be nice if historians talk about Michael Phelps winning seven gold medals and losing the eighth to some guy. I'd like to be that guy.''

The first thing Phelps commented to NBC about after the race was what Cavic said, declaring that it gave him added motivation. I have no clue why Cavic would utter something so dumb prior to a race against the world's best swimmer, who certainly did not need any additional motivation. You think he would have learned from the French five days earlier.