Tyson Homosexual out of 100m

Share All sharing options for: Tyson Homosexual out of 100m 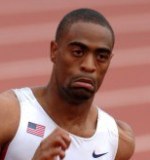 Tyson Gay, the United States' best hope in the 100m sprint, is out of the races' finals after finishing fourth in his heat, missing the third spot by .02 seconds. Because of the U.S.'s stupid way of determining their track & field team, Gay, one of the world's fastest men, will not compete in the 200m; you could argue that his injury in trying to qualify for the 200m has now cost him his shot at 100m gold, too.