Share All sharing options for: Mitcham set to dive Monday 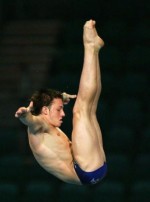 The 2008 Olympics' only openly gay male athlete will make his Olympic debut Monday in diving's 3m springboard preliminaries. Matthew Mitcham, of Australia, is expected to advance beyond the prelims, though his better event is the 10m platform which will take place later this week. You can follow results live at 7am Eastern / 4am Pacific here. The semifinal round will take place at 10pm EST (Mon), and one can only hope NBC will show it live. NBC is likely to delay coverage of the final until the primetime broadcast Tuesday night (though the event will happen at 8:30am EST), and they will focus heavily on American's Troy Dumais and Chris Colwell. It will be interesting to see whether Mitcham's sexual orientation is mentioned. For pics, videos and more, check out Matt's web site.