Chinese superstar Liu out of hurdles

Share All sharing options for: Chinese superstar Liu out of hurdles 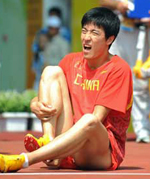 China's Liu Xiang, the defending gold medalist in the men's 110-meter hurdles and perhaps the most popular athlete in the country, is out of the Olympics after being sidelined by an Achilles injury. In terms of the impact this news will have in China, it's roughly as if Michael Phelps pulled out before his first swimming event.

Li, obviously in pain, gamely tried to race in a heat but pulled out after a false start by a competitor. It was such big news that NBC cut into its Olympic programming to show a live shot of Liu have ice applied to his Achilles. He also reportedly was battling a bad hamstring.

How big was Liu in China? Last year he made an estimated $25 million in endorsements.

Chinese fans showed they can be just as brutal on their fallen heroes as fans anywhere, with one telling Reuters: "I am extremely disappointed. I think he may have wanted to win too much and could have caved under the pressure ... The injury may be an excuse." Said another: "I feel like I am being fooled. What happened to him?"