Beckham wants in on Olympic spotlight

Share All sharing options for: Beckham wants in on Olympic spotlight 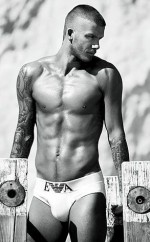 Soccer stud David Beckham, not content to cede the media spotlight to Michael Phelps, will appear at the Olympics next week as part of the official handover ceremony from Beijing to London on Aug. 24. Becks will arrive at the Bird's Nest atop a double-decker bus and kick a soccer ball into the crowd. Phelps, not to be outdone, will visit London on his way home from the Games in a marketing tour that's part of an effort to cash in on his eight gold medals.

Amid all of this flesh-trading is grumbling that London Olympic organizers can't keep details of their preparations quiet. I guess it's easier in China when an oppressive regime is in charge, so focused on image that they tape over logos on toilet stalls.