Share All sharing options for: First-hand: Mitcham cuts it close 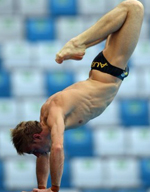 Bob Ballard of the BBC is covering the diving competition in Beijing. He wrote for Outsports about the first day of competition for openly gay diver Matthew Mitcham:

By Bob Ballard
BBC for Outsports

I hadn't even considered the possibility and I doubt if he had either, but Matthew Mitcham came mighty close to not making the semifinals of the 3-meter springboard in Beijing.

He should have comfortably been in the top 18, but going into the final round of six he was flirting with danger, in the end making it through with 10 points and three places to spare, in a competition where the leader from China scored more than 500.

Maybe it was me, but I detected an air of nervousness about the Sydney-base Australian. He was all smiles at the start, but that soon turned into an anxious grin and we didn't get the trademark Mitcham toothpaste smile until after he had completed his last dive and was assured of a place in Tuesday's semis.

What kind of reaction did he get? Not noticeably any different from any others, with the exception of the reaction the Chinese divers received.

I though it interesting under "interesting facts" in the Australian media handbook there was no indication of Mitcham's sexuality. Normally there are details about brothers, sisters, boxer dogs, that kind of thing, but nothing even hinting that he may be gay.

To be honest, it's not a huge issue in diving. Greg Louganis did a lot of the ground work for that almost two decades ago and my hunch, although not provable with hard facts, is that the Aussie is not likely to be the only homo on the 3- or 10-meter boards.

One thing for certain is he'll have to dive a lot more consistently to make the cut for the top 12. The standard is fierce and it's very competitive to reach the last dozen.

I was musing as I left the Water Cube tonight whether the timing of Mitcham declaring he was gay had worked against him and perhaps it had made him lose some focus on what he was in Beijing to do. I hope that is not the case, but Tuesday's performance or performances might give us a clue to that.

Bob Ballard is covering swimming and diving for the BBC. Read his bio here.