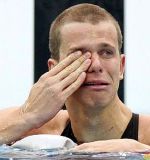 It was rather touching to see Brazil's Cesar Cielo cry after winning the men's 50-meter freestyle. He cried in the pool, he cried after getting out of the pool and he cried on the podium. "I am overwhelmed by emotion," he said. It was cool that he let the world see his emotions.