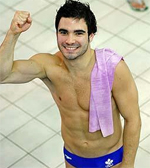 A few days back I wrote an item called "Woe Canada," that detailed how the nation of 33 million had yet to win a medal. I wasn't alone as it became a constant theme in the Great White North.

Things have changed in a hurry, with 13 medals in four days. Included in that group is diver Alexandre Despatie (right), who won a silver in the 3-meter springboard.

It's not yet like the heyday of Atlanta's 22 medals or the 18 brought home from Barcelona in 1992, but Canadian athletes suddenly are on fire at the Summer Olympic Games, wrote the Toronto Star.

Topped by a bronze medal in the 100-metre hurdles by Priscilla Lopes-Schliep, Canadians on Tuesday picked up four more podium finishes to bring the nation's total to a nearly dizzying 13. That's one more than Athens four years ago and only one less than Sydney four years before that, with more medals likely coming.

Despatie, a longtime favorite of Outsports readers, capped what had been a bummer of a year with a glorious round of dives.

"My silver medal is gold to me because of all the bad things that happened to me this year," he said. "I was able to get it together."

Despatie fractured his right foot kicking a soccer ball around during warm-ups in mid April. That caused him to miss seven weeks of training and prevented him from attending the Olympic diving trials.

To be named to the Olympic team, Despatie had to attend the Canadian junior nationals in Thunder Bay, Ont., in early July and dive before a panel of judges to prove his fitness.