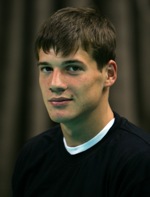 It's not easy to find much on the Web about Russian volleyballer Yury Berezhko. One of the few tidbits I was able to uncover was that his favorite kind of music is "club music," which would make him gay in the U.S. but in Europe makes him like just about everybody else. He's one of the stars of his team, and they've just advanced to the semifinals after a five-set win over Bulgaria. At 24 years and 6-foot-6, if the volleyball thing doesn't work out for him, I'm sure Abercrombie & Fitch could find something for him to do.