Among the sprinters, the women rule

Share All sharing options for: Among the sprinters, the women rule

After watching the first few days of track and field I've come to a conclusion: Male sprinters are preening, egotistical jerks, while the women are full of joy and even the losers capture the Olympic spirit.

Among the men, the worst offender is also the fastest, Jamaica's Usain Bolt, who blew away the field in the 100-meter dash. But his showboating in the final 15 meters was totally tacky and not worthy of a champion. It would have fit in quite well in the WWE. Bolt seems typical of his fellow sprinters based on how they act before, during and after races. Hey guys, you can smile once in a while.

In contrast, the women's 100-meter winner Shelly-Ann Fraser, also of Jamaica, was bubbly and effusive in her post-race interview, with a smile that lit up the Bird's Nest. It was impossible not to feel happy for her, while with Bolt I wished he had tripped while showboating. 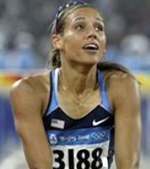 The best display of maturity and sportsmanship came from someone who lost a gold medal with one mistake. American Lolo Jones was leading the women's 100-meter hurdles and needed to only clear the final two hurdles to grab the gold. But she hit Hurdle 9, stumbled and finished seventh. It was a shocking end for the prerace favorite.

Jones was classy enough to give NBC a postrace interview where she calmly analyzed what happened and said that it "sucked" to hit a hurdle on the biggest stage. She also interrupted the interview to stop and hug the silver medalist passing by, telling her, "Good job, sweetie." Jones let her true emotions come through when a camera caught her sobbing uncontrollably in the stadium tunnel. Based on the chartacter each showed, I'd give Jones a gold over Bolt any day.