Share All sharing options for: Are Americans bad Olympics fans? 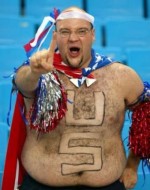 I've struggled mightily to understand why NBC prefers to tape events and repackage them for a delayed broadcast as if the sports themselves are not inherently interesting to watch. NBCOlympics.com, like every other site in the world, reports major Olympic headlines and live results, but then turns around 12-15 hours later and pretends in their primetime broadcast that the audience is clueless. Suddenly it occurred to me: we are.

Americans are valuable fans to the Olympic Movement. NBC paid $900 million for the rights to broadcast the Olympics exclusively. That is many hundreds of millions of dollars more than any other country's network. The television audience in the United States is so influential that the swimming, gymnastics, basketball and beach volleyball schedules were designed so that these events could be shown live in primetime in the US. But for all of our money and influence, we remain woefully mindless and uneducated when it comes to watching the Olympics? And NBC is the sole beneficiary.

Americans would never tolerate having to watch football, baseball, basketball, NASCAR, hockey, golf or tennis shown in tape delay. Even matches in the World Cup soccer tournament and stages of the Tour de France are shown live, even if they are later re-aired to accommodate for the time difference between continents. During the NFL season, if you don't like Fox's pre-game show, you switch over to CBS or ESPN. Or you get Direct TV or watch online. With the Olympics we demonstrate no such conviction as fans. When NBC says it's time to watch beach volleyball, we say "Okay, where do I sit?"

NBC is treating Beijing like the set of a reality TV show, editing storylines and compressing hundreds of hours of live action into four falsely sensationalized tape-delayed hours each night. And they're achieving the best ratings ever. The message is clear: Americans aren't educated enough about Olympic sports to appreciate the drama of a live Olympic event; and so, like everything else in our mainstream media, the bar is lowered to the level of the uninitiated masses. Network TV's oldest rule is enforced: the broadcast must appeal to the dumbest segment of the audience.

American's are in fact exceptional sports fans. We are the Super Bowl, the World Series, the NBA finals, March Madness, the Stanley Cup and every sold out regular season game in between. We are the Red Sox versus the Yankees, Michigan versus Ohio State. We are ESPN and ESPN2 and ESPN3 and ESPNClassics. We are Outsports. In the summer we watch hundreds of laps of car racing, eighteen holes of golf four days in a row, nine innings of baseball day after day after day. All of live, of course. In the fall we crunch baseball stats while watching Sunday Night Football and Monday Night Football after already watching a Saturday and Sunday full of professional and college football. So, no, I'm not questioning our natural ability when it comes to fandom. We just don't apply that same American tradition to the Olympics.

A sports fan must be passionate and invested. He can be skeptical, critical, bitter, biased, frustrated, exuberant or disappointed. If you're a Cubs fan you don't give up on baseball just because you haven't celebrated a World Series title in your lifetime.

But how many Phelps fans watched a swim race between 2004 and 2008? How many Americans knew of Nastia Liukin or Shawn Johnson before NBC told you two weeks ago that they were the ones to watch? The fact is, we're neither swim fans nor gymnastics fans. And we make pretty lousy Track & Field fans, rowing fans, indoor volleyball fans, and triathlon fans, too. We ignore these sports for 3 years and 50 weeks and then we tune in fully expecting to win medals in every one of them. When we do win, we're eager to claim ownership and feel nationalistic pride. We become Facebook friends with Michael Phelps. We pound our chest at the medal count. When we don't win, we write off the sport as stupid. This behavior is reinforced by NBC, which has a strong tendency to show only the sports where Americans are dominant, while editing out all the others. Did I mention they're posting record ratings?

In other countries, athletes of Olympic sports are superstars not just for two weeks every four years, but year-round. Paula Radcliff, the British marathon runner, has won popularity contests against David Beckham; tabloids hound Chinese divers like Guo Jingjing; and Ian Thorpe enjoyed Phelpsian levels of celebrity in Australia -- over his entire career, not just for two overkill weeks like the ones we've seen here where NBC has focused on Phelps as if he's going out of style (because he is going out of style, just as soon as the Olympics end and America's "real" sports resume their place in the limelight).

When the now-familiar format of commercialized, story-driven broadcasts were first introduced around the time of the 1984 Los Angeles Olympics, it was revolutionary. Ratings went nuts and Olympic fever spread into new segments of the population. The influx of cash into the Olympic Movement ensured its place in contemporary culture and made it viable for decades to come. But now the technology has changed and every single Olympic event could be shown live on demand online, offering even more areas to collect ad revenue. In contrast, the closely scripted, tape-delayed broadcast that NBC delivers in primetime feels like isolationist propaganda compared to what the rest of the world is watching. And I think it's going to come back to bite us.

How will the United States ever compete with China in sports like diving or badminton if our youngsters are exposed only to beach volleyball and swimming? How will we compete with African nations in distance running if we only learn the storylines of American sprinters? America is paying more than its fair share in TV rights, and we're harming our own Olympic futures in the process.

I will end by saying that NBC's coverage of these Olympics has far surpassed any previous Olympics in flexibility and sheer volume. Really, I shouldn't complain. In fact, maybe I'm not complaining, but instead pointing out that we can do better. We are a diverse and populous nation. There is room to be passionate and educated about Olympic sports in addition to the sports we already obsess over. If the United States has any interest in remaining dominant on the Olympic stage, we need to observe the Olympics not like a reality show, but as they really are: a complex and inspiring human phenomenon. (And, please, can we do it live.)