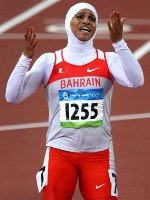 It's tough enough running a 200m race against the best sprinters in the world, and it's hard enough to do it in 85-degree weather. But to have to wear a full body suit when everyone else is in shorts and tanktops: borderline cruel. That's what Bahrain sprinter Roqaya Al-Gassra faced these Olympics, holding to Islamic law and covering all of her body but her face and hands as she ran through to the semifinals and missed the finals by 0.11 seconds.

The men of Bahrain, of course, don't have to cover themselves, and runner Rashid Ramzi won the 1500m, Bahrain's first Olympic medal ever. I wonder how Al-Gassra might have done if Islamic law didn't handicap her, and she was treated equal to the men.