Share All sharing options for: Beard disses Phelps: 'Eww ... He's not my type' 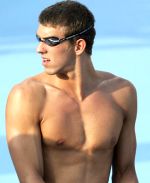 U.S. swimmer Amanda Beard totally dissed Michael Phelps when asked if the two were dating: "Eww, that's nasty ... Come on, I have really good taste. He's really not my type."

"I have never, ever hooked up with Michael Phelps," Beard said via telephone from Beijing on the "Johnjay and Rich Show," which is broadcast on Kiss FM 104.7 in Phoenix.

Beard, who has bared all for Playboy and appears in a sexy ad for PETA, also said she has never even kissed the 14-time Olympic gold-medalist.

Phelps also denied that he was dating Beard, though he handled it in a much more diplomatic fashion, telling the TV show "Extra": "I'm not dating Amanda Beard. I'll say that. I think she has a boyfriend." (She is dating a photographer).

Realizing what a total b**** she sounded like, Beard later issued an apolgy via People: "Everyone who knows me knows I can be a jokester, but I guess I took it too far. I never meant to say anything rude about Michael. I am 100-percent sorry for what I said. I take full responsibility for it."

So, Beard says that Phelps makes her go "eww!" A champion swimmer with a body of death and a crooked grin? If Phelps decides to ever play for our team, I know several thousand Outsports readers whose reaction would be anything but "eww!"