Share All sharing options for: Lesbian Olympian tells gays to shut up 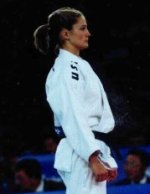 Former Olympic athlete Lauren Meece, who competed in Judo in 2000, is angry about some perceived push by gays to get Olympic athletes to come out, and she wants gays to shut up. She wrote a column for the Express Gay News:

The GLBT community should let gay athletes deal with gay issues off of the podium. In the name of the Olympic spirit and humanity... shut up and let gay athletes focus on the endeavors that they have worked so hard to reach.

Maybe Meece is just lashing out about her one-and-done performance in the Olympics. Maybe she has some internal struggle she's still dealing with for not saying more when she competed. I don't know. But for whatever reason, she's mad as hell, and she's going to take it out on gay fans who would love to see more openly gay athletes. How dare they!!