Matthew Mitcham 'immaculate' on the platform

Share All sharing options for: Matthew Mitcham 'immaculate' on the platform 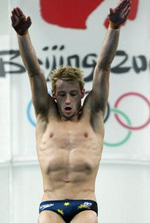 Bob Ballard is covering diving for the BBC. He wrote for Outsports about Matthew Mitcham's dives in the 10-meter platform prelims.

Remember that ill-at-ease, almost petrified looking Aussie I was telling you about who competed in the 3-meter diving competition the other day, and looked out of his depth? What a difference a few days make.

20 year old Matt Mitcham appeared a completely different man on the Platform, or Tower as the Australians like to call it.

Whereas his dives on the springboard lacked conviction, hastening his exit out of the competition at the semifinal stage, everything he did from 10-meter range looked immaculate.

There must have been nerves and a few butterflies for Australia's only current ‘out' Olympian, but they weren't in evidence from where I was sitting side on to the high board, or in the closeups on the TV monitor in front of me.

Dive 1 brought marks in the 80s, which for the uninitiated is very good, bordering on excellent, and from there on in the man from Sydney looked in his element. "If I just do what I normally do I should make the final, that should be no problem," Mitcham told reporters.

There was only one moment where he could have faltered, but tell me someone who looks comfortable doing an arm stand from 30 feet up, and I'll show you a liar. Once he had his legs in a vertical position (no lewd comments, you lot) the complex dive was completed with ease. Many of the other divers made a complete mess of that tricky maneuver.

In second place virtually throughout the preliminaries, Mitcham is a real medal contender. It's going to be the toughest competition to win with two Chinese divers, whose supporters are bound to sway the judges, Gleb Galperin, the Russian who won here in Beijing earlier this year, Britain's Peter Waterfield, diving brilliantly despite a bad shoulder (not what you need hitting the water are 40 miles per hour) and Germany's Sascha Klein all in the mix. Then you have the slightly unknown factor of Thomas Daley, the new sports darling in Britain, who turned 14 in May and who took the European title from Klein in March. It will be a competition that is too close to call at this stage.

Mitcham did Australia proud today and gay sports fans and athletes, too. In less than 12 hours from now as I type this, he has to do it all again in the semifinals, when only the top dozen will progress to Saturday night's final. There are two Americans in there currently, so hopefully NBC will do the decent thing and let you see it.