Share All sharing options for: Sweaty badminton shoe worth $70,000 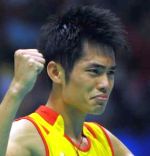 The China Daily reported that the sweaty shoe badminton gold medalist Lin "Super" Dan (a Chinese superstar) chucked into the crowd after his win could be worth more than $70,000. Following his victory Sunday, Lin removed his shoes and threw them into the appreciative crowd (along with his racket). On chat sites among Lin's die-hard fans, as many as 100 people claimed to have the shoe, according to the report. One fan who claimed to have it offered 100,000 yuan ($14,000) for the other shoe. Another well-heeled Lin aficionado offered 500,000 yuan ($73,000), enough to buy an apartment in most Chinese cities, according to the paper.