Share All sharing options for: NBC defends not saying Mitcham is gay 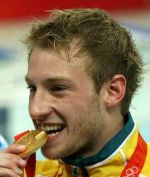 NBC defended its decision not mention Australian diver Matthew Mitcham's sexual orientation with a series of answers that were more spin than fact.

AfterElton.com reached NBC spokesman Greg Hughes, who was not aware there had been any controversy over the way the network covered Mitcham during Saturday night's men's 10-meter platform diving finals. Mitcham, who is publicly gay and had his partner in the stands, stunned the diving world by winning gold. NBC did not mention Mitcham being openly gay, which cause Outsports and other websites to take the network to task.

When asked why at no point during the coverage did NBC mention Mitcham was gay or that his partner was in the stands, Hughes [told AfterElton], “In virtually every case, we don’t discuss an athlete’s sexual orientation.”

When it was pointed out that in fact the network does exactly that by telling viewers about Olympic athletes’ various spouses, boyfriends, girlfriends, and even in one case a heterosexual “love triangle” Hughes responded, “Not in every case. Not every athlete has a personal discussion. I could show you 500 athletes we didn't show. We don't show everyone. We don’t show every ceremony.” ...

Let's take Hughes' defense one by one:

“In virtually every case, we don’t discuss an athlete’s sexual orientation.”

Wrong. By showing or describing a male athlete's wife or girlfriend, or a female's husband or boyfriend, NBC, by default, is discussing their sexual orientation. They might as well put "Straight" in an on-screen caption.

"Not every athlete has a personal discussion."

True, and no one expects more than a fraction of athletes to be profiled.

However, NBC DID discuss Mitcham's private life by mentioning that he had quit the sport and was dealing with "personal issues" (he suffered from depression). NBC did think his personal story interesting enough to mention, but they left out the one part that would have made viewers sit up and take notice, a point Mitcham did not hide -- he is gay.

NBC had to be aware of this fact since its online profile of Mitcham said this about the diver: "Mitcham made headlines in Australia when he revealed to the Sydney Morning Herald that he is gay, becoming one of the first Australian athletes to do so. Mitcham said he hopes he can find a way to bring his partner, Lachlan, to support him Beijing -- though he can't afford it on his own"

“It's not possible to cover the entire personal story of every athlete regarding their performance."

Fair enough, but wrong in this case. You had an openly gay male athlete competing, which NBC's website admits is rare. You had the only non-Chinese diver to win a gold medal, doing it with a near-perfect dive, making viewers wanting to know more about this person. It would have taken one of NBC's two diving commentators, Ted Robinson and Cynthia Potter, all of 10 seconds to mention that Mitcham is gay. You can bet they would have mentioned had he been the first Muslim diver with a medal chance or the first Mongolian.

I am not yet ready to accuse NBC of homophobia, since we don't know exactly why its commentators and producers whiffed on mentioning Mitcham's orientation. But I will accuse them of journalistic incompetence, for missing a major angle about a gold medal-winning athlete who beat competitors thought to be unbeatable, an angle not unnoticed by other journalists covering the event. The judges would have given them 1.0's across the board for a belly flop.