Share All sharing options for: SEC QBs licking and spooning

With college football season approaching, I figured we'd revisit a couple fun pics from May of 2007, in which some college football players getting touchy-feely with other guys, including Tim Tebow. Yep, that's apparently the Florida quarterback and reigning Heisman Trophy winner going to lick the ear of some other guy. Tebow's been caught on camera all smoochy smoochy with another guy before, namely last September during a game. Could Tebow actually have some Romosexual tendencies, or is he just a metrosexual guy who isn't afraid to lick another guy's face?

Then there are the photos (one after the jump) of Georgia quarterback Matt Stafford spooning a guy at Talladega last year. Gotta love these crazy kids showing each other some love! -Cyd Zeigler jr. 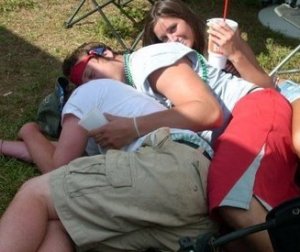