Share All sharing options for: Beijing gay scene thrives on eve of Olympics 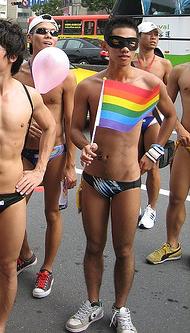 Reports earlier this spring suggested that Beijing's gay scene had become a government target in advance of the Olympics. The Gay Times of London is challenging that notion, insisting that the western media was too quick to jump on the gay oppression story and that the shutdown of popular gay night clubs was infact the result of fire and safety issues rather than homophobia.

“It makes me very angry that gay activists, who know nothing about China, and don’t even live here, report that the Chinese government is trying to stamp out gay culture.” Edmund C is one of the co-owners of Destination, the aircraft-hangar sized, industrially styled nightclub that’s the pivot of gay Beijing.

The article is a fascinating look at a subculture within the looming, foreign Chinese culture that most westerners too easily dismiss as "extreme, inscrutable, dismissive of human rights." In fact, China is merely different from the west. And in some cases the same.

Spend a night out on the town with the cute gay boys of Beijing, and you’ll soon realise that, in many ways, boys who like boys – whatever their longitude and latitude – will be boys….
“In the West, you’re a top or a bottom,” says LB with a sprinting laugh, grasping his Corona beer by the scruff of the bottleneck as he leans on the bar of Destination’s powercut-dark dance room, “in China, it’s the same, but we say you’re a ‘1’ or a ‘O’. My friend here, Guan, is a ‘0.5’."