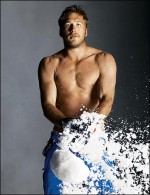 It seems the U.S. Olympic Committee is so over Bode Miller (photo). For the first time ever, the group required all of its 596 Olympians to attend its crash-course on etiquette before heading to the Beijing Games. Some athletes dubbed it "the Bode Miller show" after the American skier who showed more of an interest in partying than competing during the 2006 Winter Games in Italy.

During one of the classes in Palo Alto, there was Michael Phelps snacking from a bag of candy and Ryan Lochte texting on his phone. How do you say "indifferent" in Chinese?