Share All sharing options for: Under Armour's new image problem 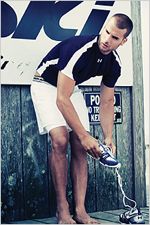 Under Armour, the hyper-masculine line of workout gear, might just have muscled its way into an image problem with the same gay men who wear it proudly at the gym.

A piece from the New York Times explores the company and its meteoric rise since former college football player Kevin Plank launched it in 1996. (Hat tip to Kennethinthe212)

But while the style attention focused on the crazy and colorful new underwear and skinny emo-boy clothes, Under Armour underwear and athletic wear stealthily infiltrated the closet and consciousness of the modern man’s man. Well known and much loved by military personnel, sports teams, weight lifters and, more and more, those who aspire to the above, Under Armour has not only redefined gym-pumped machismo for a new generation, it has put it on steroids.

And like most things on juice, Under Armour sometimes doesn't think too clearly. The owner of a sports-underwear web site accuses Under Armour of being afraid of the gays.

Similarly, the company has carefully controlled distribution. For years it has largely restricted sales to sporting goods stores, military-base exchanges and sports- and military-oriented outlets. One of the largest and most inclusive sports-underwear sites was turned down by Under Armour when it sought to sell the line. The owner, who asked that he and his site remain anonymous in case negotiations started up again, was told by an Under Armour representative that its owner found his site “too homoerotic, too gay.”

Mr. Plank denied any knowledge of the snub, exclaiming: “What? No way!”

Whether or not this attitude was official policy, it has cemented the brand as aggressively heterosexual at a time when few other brands would care to be branded as such. So while Tom Ford may have made Tom Brady look debonair for this spring’s “Superheroes” gala at the Met, Under Armour custom-made Jamie Foxx’s jockstrap for “Any Given Sunday.” Guess who got more yardage?

To its credit, the company includes "sexual orientation" among a host of protected categories in the nondiscrimination statement posted on its web site. But it appears they have a little more work to do to respect all of their customers, me included. –Matt Hennie